Ugly Vegetables and Fruit Again to be Sold in Europe!

Ugly Vegetables and Fruit Again to be Sold in Europe! 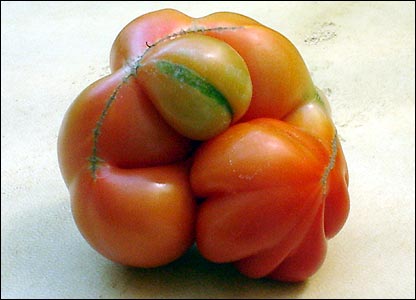 Amazing.  The European Union actually responded to criticism.  About one-fifth of European produce has to be dumped because it doesn't mean minimum EU standards, which have nothing to do with health.  Under criticism for conducting a jihad against ugly veggies, the EU appears to be backing down--though the vote will be close.  Reports the Times of London:

Knobbly fruit and amusingly shaped vegetables, the staple diet of local newspapers, caption competitions and That's Life!, are set to return to the shops in a reprieve from strict European Union laws. The regulations covering the size and shape of 26 types of fruit and vegetable are expected to be abolished today by EU agriculture officials in a move that should make food cheaper and more fun. It will reduce the waste caused by an estimated 20 per cent of farm produce - such as curvy cucumbers or crooked carrots - being rejected for not meeting EU standards and should bring prices down at a time when household budgets are under heightened pressure. The rules will remain in place in ten cases, including apples, pears, citrus fruit, strawberries and tomatoes - items representing three quarters of all fruit and vegetables sold in the EU. Pears, for example, will still fail to qualify as Class 1 if more than 1cm2 of their total surface area suffers a slight skin defect. However, fruit and vegetables classified as “imperfect” are likely to be made available provided they are sold separately from their perfect peers and labelled “product intended for processing”, or with a similar wording. The deregulation was proposed by Mariann Fischer Boel, the EU Agriculture Commissioner - and herself a farmer - but the vote will be a close call owing to opposition from France, Italy, Spain and Greece. It is expected to pass now that Germany has swung behind the move, which was supported strongly by Hilary Benn, the Rural Affairs Secretary. “I think a large dose of common sense is required here,” Mr Benn told The Times. “Frankly, if shops want to sell, and consumers want to buy, funny-shaped carrots and turnips then I do not really see what the problem is.” The EU's criteria, which have long provided fodder for critics of “barmy Brussels”, go into astounding detail. They dictate that a Class1 green asparagus must be green for 80 per cent of its length, Class 1 cucumbers should not be bent by a curve of more than 10mm per 10cm, and a string of onions must have 16 onions to qualify.

Who knows?  Maybe this deregulatory fever will jump the Atlantic and the incoming administration will decide not to wreck the U.S. economy in order to, oh, stop a nonexistent threat of catastrophic warming.  Nah ... .