If you haven’t yet heard of Zipcar, you soon will. Zipcar is a revolutionary service billed as “car-sharing,” but perhaps better described as “immediate renting.” Zipcar owns a fleet of cars that they scatter throughout major cities such as New York, San Francisco, Boston, and Washington – not in big, out-of-the-way rental lots, but parked on streets all over town. Cars – cool, late-model vehicles – are available hourly for reasonable rates. Zipcar fills a niche in the transportation market: students and other young, hip, but low-budget types (like me) who need a car only occasionally, to make an IKEA run or drive someone to the airport or haul groceries back from the farmers’ market. These “Zipsters” (as Zipcar brands its members) are freed of the hassles of public transportation: the wasted time, the crowdedness, and the inability to haul more than you can carry. 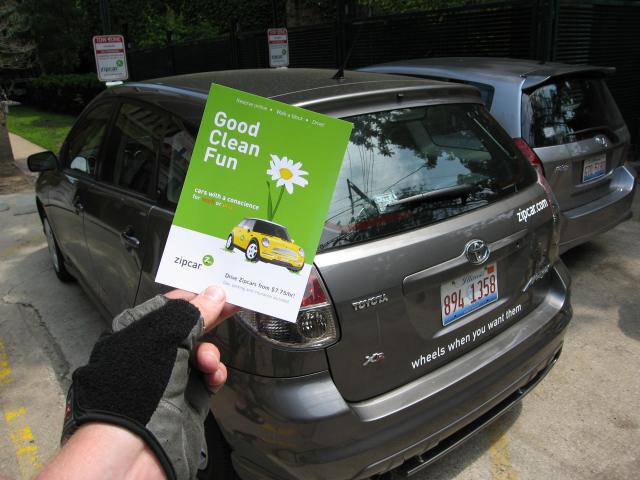 Zipcar would not have been possible ten years ago. That’s because Zipcar utilizes RFID, gas card, and tracking technology to allow their vehicles to be maintained all over the place with relatively little involvement from Zipcar employees. Rapid technological advance has made Zipcar possible. And Zipcar’s popularity has exploded in recent years. With gas prices increasing and the economy slowing, Zipcars (which include gas and insurance in their rates) start looking like a better deal. Zipcars are the free market’s way of adjusting to increasing gas prices, by enabling people to drive when needed but allowing them to forgo the costs of car ownership.

Last year, Zipcar acquired its main car-sharing rival, Flexcar, with benefits for consumers including the ability to drive many more cars in more cities with only one membership fee and the enhanced ability of Zipcar to partner with businesses and universities. But competition has not died in car sharing. Now, U-Haul and Enterprise are getting in the game too. Zipcar’s story in some ways resembles Netflix‘s. Netflix’s early dominance of the DVDs-by-mail market did not protect it against major brick-and-mortar retailer Blockbuster from going online and providing competition (and additional services) that drove down prices. Zipcar may not be for everyone, just as Netflix isn’t, but it’s a nice example of market experimentation doing what government mandates never could.