Last week, I had the pleasure of learning about the new artistic tribute in honor of Ayn Rand’s novel Atlas Shrugged on the 50th anniversary of its publication. Guatemala’s Universidad Francisco Marroquin (UFM), an institution of higher learning dedicated “to the teaching and diffusion of the ethical, legal, and economic principles necessary for a society of free and responsible individuals,” recently unveiled Atlas Libertas, a relief sculpture that greets visitors to the university’s business school building. Artist Walter Peter Brenner, who studied architecture at UFM, explains the ideas behind his creation of nearly-15-foot sculpture:

For me, Atlas Shrugged represents many ideas and emotions. I read Ayn Rand’s masterful literary classic in 1991 while studying sculpture in Switzerland. In fact, I was travelling by train at night as I read the description of Hank Rearden’s steel factory. As we crossed the railroad bridges with the lights in the distance resembling those steel factories, a chill ran through me as I imagined my SELF-MADE MAN, created from steel. It was the abstraction of a sculptural idea that would haunt me for the next sixteen years, until now when I find myself completing it; no longer abstract, but concrete. 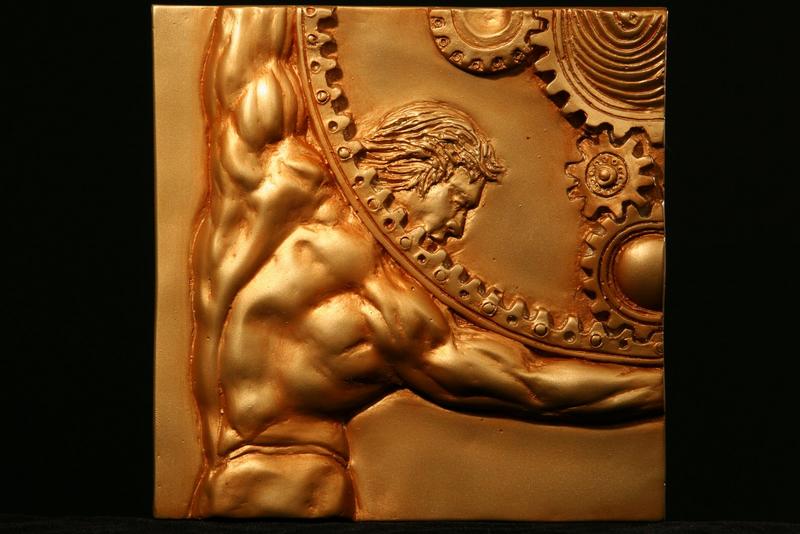 Observers will notice that the Atlas depicted here is not holding up the Earth but a series of mechanical gears. There’s a reason for that, notes the artist:

In my recreation of Atlas, it is not the mythological figure I represent, but a metaphorical one in the form of a human being, the individual mover of human development here on Earth and in the Universe; a capable, strong, just, ambitious, and intelligent human who requires individual freedom in order to reach his highest potential. It is, thus, Rand’s heroic vision of man that I want to express: a person who through his essential virtues remains true to his highest values, struggling to achieve his goals without violating the individual rights of his fellow man.

Congratulations are in order to UFM and Walter Peter Brenner.