A recent study by the Manufacturer’s Alliance/MAPI finds that EPA’s proposed revision of the “primary” (health-based) national ambient air quality standard (NAAQS) for ozone (O3) would have devastating economic impacts.

NAAQS are emission concentration standards expressing EPA’s judgment of how low air pollution levels must fall to “protect public health” with an “adequate margin of safety” and to “protect public welfare” from harmful effects on agriculture, animal life, and buildings. The Clean Air Act obligates States to come into attainment with NAAQS via EPA-approved emission control measures known as State Implementation Plans (SIPs). The Act requires States to attain primary NAAQS within five or at most 10 years. There is no statutory deadline for attaining “secondary” (welfare) NAAQS. Failure to attain NAAQS results in sanctions, such as loss of federal highway grants.

In a companion report, the Senate Republican Policy Committee (SRPC) shows the MAPI-estimated job losses and “energy tax” burden (compliance cost + GDP reduction) each State would incur if EPA implements a 60 ppb ozone standard. The biggest losers are California, Pennsylvania, and Texas, although nearly all States face multi-billion dollar energy taxes and thousands to tens of thousands of lost jobs:

Costs Increase as Intensity and Scale of Effort Increase

How can the impacts be so punitive? One reason, says MAPI, is that “the marginal cost of incremental reductions increases very rapidly as the standard is tightened.” As is often said, picking the low-hanging fruit is easier and cheaper than harvesting from the top of the tree. As MAPI puts it:

Initial reductions in ozone are relatively less expensive because the reductions can be achieved by using existing technologies (“known controls”) to reduce ozone precursors. As standards are tightened, more expensive technologies are required and at some point new technolgies (“unknown,” yet-to-be-developed controls) are presumed [by EPA] to emerge and then be implemented.

Another reason is that ever-larger reductions in ozone-precusor emissions are required to achieve the same incremental decline in O3 concentrations. On this point, MAPI sites EPA’s July 2007 Regulatory Impact Analysis (p. 4-12):

The dramatic increase in the scale of effort is evident from the sharp increase in the number of counties that fall out of attainment as the standard is tightened from 84 ppb down to 60 ppb. 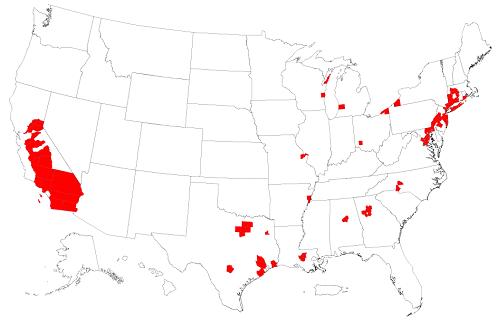 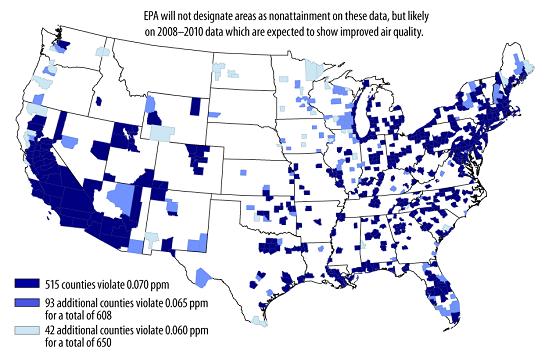 How Dangerous Are Current Ozone Levels?

A predictable response to the MAPI and SRPC reports is that ozone kills and we should do everything possible to protect “the children.”

Joel Schwartz and Steven Hayward of the American Enterprise Institute analyze the literature on ozone and health in their book, Air Quality in America: A Dose of Reality on Air Pollution Levels, Trends, and Health Risks.  They present substantial evidence that ozone at current levels is a relatively minor health risk:

EPA and CARB characterize ozone as a deadly peril, which is hardly surprising. Regulatory agencies exist to regulate. The scarier the assessment, the greater the apparent rationale for expanding the scale and scope of regulation. On the flip side, as my colleague Ben Lieberman observes, the “non-attainment industry” would take a huge hit if the Nation finally did come into attainment with all applicable air quality standards. To stay in business, the regulatory establishment must continually campaign for tougher standards as U.S. air quality improves.

Schwartz and Hayward ask: If current ozone levels are so deadly, then how come EPA and CARB project such tiny health benefits from reductions in those levels? For example, EPA estimated that switching from the pre-1997 ozone standard of 120 ppb averaged over 1 hour to the tougher standard of 84 ppb averaged over 8 hours would reduce hospitalizations for asthma attacks by only 0.6%. CARB estimated that adopting its even tougher 70 ppb standard would reduce emergency room visits for asthma by 0.35%. Even these small benefits are likely to be overestimates since the projections are “based on a selective reading of the health effects literature that ignores contrary evidence,” Schwartz and Hayward argue. And I’ve got to wonder, given the multitude of factors that influence hospitalization rates, how would EPA and CARB ever know whether a tiny reduction in hospitalization rates were due to their regulations rather than to a host of other unrelated causes?

Wealthier Is Healthier, Poorer Is Sicker

The irony is that adopting costly new air quality standards may actually impede improvements in public health. The resources available to protect public health, safety, and the environment are finite. Consequently, policymakers should set priorities to target limited resources on the most serious risks. Forcing the private sector to spend trillions of dollars to achieve miniscule or non-existent health benefits hinders rather than advances public welfare. Moreover, because people use income to enhance their health and safety, regulations that destroy jobs, lower wages, and increase the cost of consumer products can literally be lethal. Spare-no-expense, health-at-any-cost regulation ignores the obvious connection between livelihoods, living standards, and life expectancy.

A prosperous economy supports the development of improvements in health care and makes those improvements more widely available. In contrast, a faltering economy diminishes investment in R&D and curbs spending on life- and health-enhancing goods and services. Unemployment is stressful and is associated with unhealthy habits such as smoking and excessive drinking. Several studies (here, here, here, here, and here) confirm what common sense tells us — that poverty and unemployment increase the risk of sickness and death. As the late Aaron Wildavsky observed long ago, wealthier is healthier. An ozone NAAQS that imposes trillion-dollar energy taxes on our struggling economy and destroys over 7 million jobs is likely to do much more harm than good.