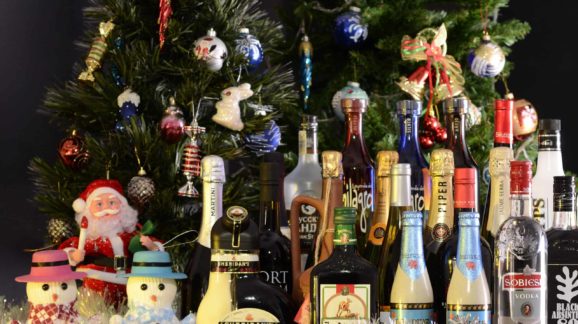 The post below was current for 2015. Read Michelle’s updated data on holiday liquor laws for 2021 here.

Nobody wants to drive an hour over the border just to get booze, especially on Christmas Day. However, 27 states in the union still have blue laws—hangover regulations from Prohibition—that could cause headaches for those shoppers who failed to finish their alcohol shopping early. So, for those of you planning to have a “cup of cheer” on Christmas or New Year’s, I offer this guide to our wacky state holiday laws. Because Christmas falls on a Sunday next year, adding another layer of crazy, I’ve included details about states that prohibit Sunday sales. Caveat: While most of the states on the list below have state-wide prohibitions, some states have laws that vary by county and even if your state doesn’t make the list, individual stores may elect to close on Christmas or New Year’s Day. In short, even with the help of this expert guide, you still might want to buy your holiday party booze ahead of the holidays (leave the last minute stuff for buying gifts for your family).

Alabama, which is a control state (meaning you can only buy take-home liquor at state-run stores) does allow off-premise sales of liquor through state-run stores, all of which will be closed from 4pm on Christmas Eve until the following Tuesday.

Colorado lifted the Sunday sales ban in 2008, however, off-premise alcohol sales are banned on Christmas Day. If you’re really in need you’ll be happy to know that you’ll be able to buy 3.2 percent ABV beer at grocery stores (if they’re open) on Xmas day.

Idaho: While the state repealed their Election Day liquor ban in 2009, the prohibition on liquor sales Christmas day remains in effect.

Kansas: While some counties may permit Sunday sales as of 2005, liquor stores are prohibited from selling on Christmas.

Maryland: Oh, Maryland. The state that I currently call home has a labyrinthine system of liquor laws, which means that rules vary widely from county to county. Particularly confusing is the fact that while the state itself is not a “control state” meaning that the state doesn’t own or operate liquor stores, Montgomery County is a “control county” that shuts down its liquor stores on Christmas Day (according to the Chief Operator of the Montgomery Dept. of Liquor Control). Other counties in Maryland, such as Prince George’s, will have sales on Christmas—even when the holiday falls on a Sunday.

Massachusetts: As with Thanksgiving (for now), Christmas day sales are not allowed in the Bay State. Also, if the holiday falls on a Sunday, liquor stores must remained closed the following Monday.

Montana: There are about 100 state-run liquor stores that are required to close on “legal” holidays like Christmas. However, there are many other places one can purchase alcohol, including non-state run liquor stores.

New Hampshire: Wine and beer can be purchased in NH grocery stores, but as a “control state” liquor can only be sold at state-run stores. While there’s no official prohibition on the books, the office of the Liquor Commissioner informed me that the liquor stores will not be open on Christmas.

North Carolina is a control state that prohibits liquor stores from selling on Sundays until after noon and bans sales on Christmas day.

Ohio is a control state and according to an official at the Ohio Division of Liquor Control in 2011, “In Ohio, all Agency Outlets (spirituous liquor) are privately owned and operate on a Contract with the Division. By policy, the outlets are closed on Christmas Day.” There is no evidence that the DLC has changed its operating policy.

Oklahoma makes it illegal to sell on Sundays as well as on holidays, including Christmas.

Pennsylvania is another control state where the government run liquor stores must closed on holidays, including Christmas day. Stores will be closed on Christmas Eve after 6pm.

South Carolina: While the state lifted their Election Day liquor ban last year, Christmas is still off limits for off-premise sales. While there may be exceptions, liquor stores, for the most part, may not operate on Christmas Day.

South Dakota allows sales of malt beverages, like beer, but on Christmas Day liquor and wine may not be served or sold.

Tennessee: Liquor stores must be closed on Sundays and Christmas.

Texas law bans the sale and serving of hard liquor on Sundays and Christmas and when Christmas falls on Sunday as it will next year, state law requires liquor stores to close the following Monday as well.

Utah is a state that’s notorious for its weird relationship with alcohol. So, it’s not a big surprise that liquor stores are closed on Christmas and New Year’s days. However, take note that stores will also close at 6pm on Christmas Eve and 7pm on New Year’s Eve.

Virginia: Despite efforts to privatize, the state remains a “control state,” so spirits can only be purchased in ABC stores, which will be closed on Christmas and New Year’s days. Luckily, beer and wine are sold in many grocery stores throughout the state.

West Virginia, another control state, does not allow off-premise sales of liquor on Christmas Day.

But it’s not all bad news. There have been many positive developments on the alcohol-front since the last time I last made a list like this. At least two states that used to prohibit alcohol sales on Christmas now allow it.

Indiana repealed the Christmas liquor ban just before last year’s Christmas. However, Sunday sales are still prohibited and next year Xmas just so happens to fall on that day of the week. You’re officially warned, Indianians.

Washington State ditched the controls and privatized liquor sales in 2012 so grocery stores measuring at least 10,000 square feet may sell liquor. Presumably, if those stores are open on Christmas/New Year’s, you’ll be able to purchase all the booze you want.

Beyond “blue laws,” many states have been repealing or replacing restrictive Prohibition-era alcohol laws with rules friendlier to small businesses. Much of this change has come from the efforts of local brewers, wine makers, and drinkers willing to take a stand and speak up. So, raise a glass this holiday season, but remember that if you want better alcohol laws in your state, it’s up to you to fight for them.