Space.com reports on the release of a (compressed) sound recording of Saturn’s radio emissions, from the Cassini spacecraft, that sounds uncannily like the musical score from the 1956 classic sci-fi movie Forbidden Planet. Space.com notes on the composition of the Forbidden Planet score:

The soundtrack for the movie was created by Louis and Bebe Barron. The film represents the first instance in which a movie was scored entirely with electronic music. Louis Barron constructed electronic circuits that generated the sounds; most of the tonalities were generated using a ring modulator. In creating the electronic circuits, Barron used the equations in Norbert Weiner’s 1948 book Cybernetics: Or, Control and Communication in the Animal and the Machine.

You can also get similar sounds from a theremin, the touchless electronic instrument that emits an ethereal, undulating sound reminiscent of 1950s sci-fi soundtracks — named after its inventor Leon Theremin. (Thanks to Margaret Griffis for the Space.com link.) 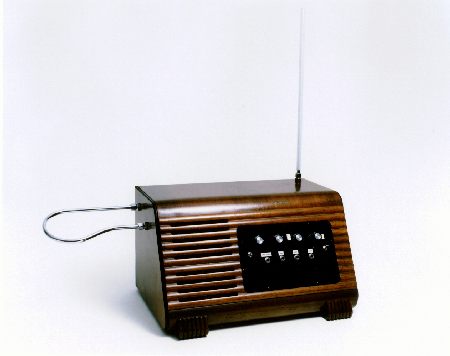