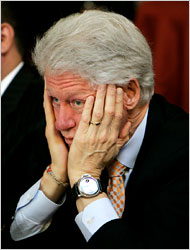 Last weekend in Nevada, former president Bill Clinton said he witnessed voter intimidation firsthand. According to Clinton, a union representative was telling workers to agree to caucus for Sen. Barack Obama or expect to get a work schedule making it impossible for them to attend at all.

So union bosses try to bully their members into backing their preferred candidates — no surprise there; that’s how they often wield political clout. What’s surprising is hearing Democratic politicians who have long enjoyed union support talking about it so openly. Such shenanigans aren’t new, and will likely occur again during the general election, so I’m grateful for Bill Clinton’s admission, since it exposes the mendacity of liberal Democrats’ support of the mandatory card-check bill perversely known as the “Employee Free Choice Act.” (Card check allows union representatives to organize a company by getting workers to sign union cards out in the open, without need for a secret ballot.) Lindsey goes on:

I wonder if, having seen such voter intimidation, the Clinton campaign will change its position on doing away with government-supervised secret-ballot elections for union representation. Under the Orwellian-named Employee Free Choice Act, secret-ballot elections to decide whether a plant is unionized would be replaced with a public “card check” system, under which both employers and union organizers would know how each worker voted. Sen. Hillary Clinton, Obama and former senator John Edwards all support this bill.

But a card-check system would offer even more room for intimidation of workers. A union card can be signed by workers at any time during an organizing campaign, which can take many months. Union organizers can pursue workers in their homes, at churches and civic clubs, and at watering holes after hours. Workers’ family members can also be intimidated during this process. So much for a “free choice” for employees.

With their private sector membership plummeting, many unions are turning to card check, coupled with corporate campaigns (which I discussed here yesterday), to stem that tide. As I’ve noted before:

Employees are often urged to sign cards publicly and in the presence of union organizers, which exposes them to high-pressure tactics which the secret ballot is designed to avoid.

But if card check “neutrality” is so lopsided in favor of the union, why would any employer agree to it? To stave off union attacks. To get employers to agree to a card check procedure, unions often resort to what is known as a “corporate campaign.”

Corporate campaigns are elaborate political and public relations campaigns that labor unions use to target a specific employer or group of employers. The union doesn’t simply picket the employer. Its tactics include feeding allegations of company wrongdoing to the news media, filing complaints with regulatory agencies, and enlisting allies, such as liberal church groups or environmental activists, to publicly denounce the company. The message to the employer is simple: Allow us to unionize your workforce or we will destroy your reputation.

Such efforts will ultimately fail. Strong-arming people into joining your organization will only get you so far if you’re not offering something they really want — in which case intimidation would be unnecessary — but not before causing many workers and their employers considerable grief.