The recent heat wave was a hot one. Naturally, progressive commentary “linked” it to climate change. The linkage almost seems tautological. How could rising global average temperatures not increase the frequency and intensity of heat waves? Surprisingly, the expected greenhouse “fingerprint” or climate change “signal” in U.S. summer temperature data remains elusive.

On Saturday, July 20th, the “heat index” in Washington, D.C. peaked at 106°F. As explained by the National Weather Service, the “Heat Index is a measure of how hot it really feels when relative humidity is factored in with the actual air temperature. . . . As an example, if the air temperature is 96°F and the relative humidity is 65 percent, the heat index—how hot it feels—is 121°F.” On the following Monday, WMAL radio talk show host Chris Plante noted that on July 20th in 1930, the temperature in Washington, D.C. hit 106°F. That was decades before the rapid postwar rise in atmospheric carbon dioxide concentrations. In those days, moreover, weather services reported just the temperatures measured by thermometers without upward adjustment for relative humidity. 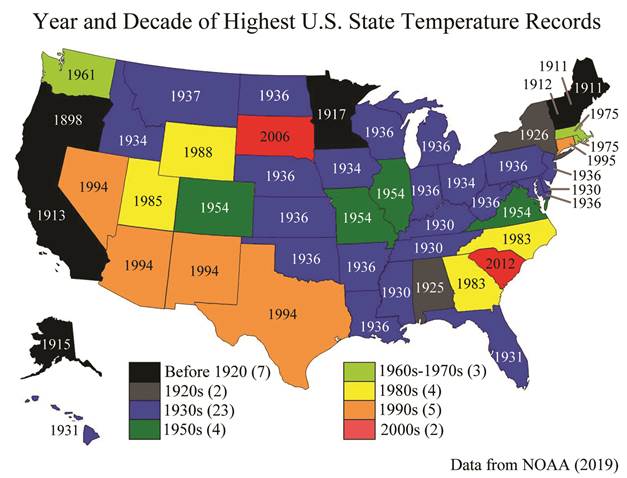 The recent heat wave affected an estimated 200 million people, and six people died. But heat waves are far from the greatest risk factor Americans face in their daily lives. The Centers for Disease Control estimate 8,081 heat-related deaths were reported in the United States during 1999-2010. That works out to 735 deaths per year. In contrast, 37,461 Americans died from automobile accidents in 2016, and 80,000 Americans died from the flu and its complications in 2017.

The good news is that since the 1960s, heat-related mortality rates in the United States and other developed countries have declined. Moreover, globally, the individual risk of dying from all forms of extreme weather has declined by 99 percent since the 1920s. That is chiefly due to wealth creation and technological advances supported by mankind’s increasing utilization of fossil energy.

Chilling economic growth by taxing and regulating away humanity’s access to fossil energy will not help societies mitigate existing climate-related risks or adapt to a changing climate, but more likely hamper the ongoing progress of the past 100 years.