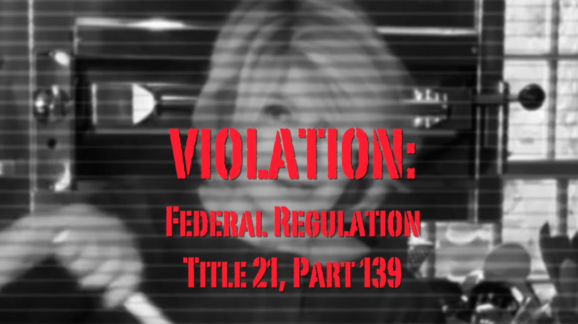 Have you ever made an unreasonable gesture to a passing horse in a national park? If so, you are already a federal criminal. For the rest of us, there’s a new work of reference, humor, and legal theory from attorney Mike Chase titled “How to Become a Federal Criminal: An Illustrated Handbook for the Aspiring Offender.”

Todd Krainin of Reason TV recently sat down with Chase for the video interview above. While a lot of the violations they talk about are preposterous and funny, the problem of over-criminalization is very serious. Americans are often held liable for violating arcane federal rules that no normal person could be expected to know about. Even worse, the wild proliferation of activities that we can be fined or imprisoned for means that federal (and, often, state) prosecutors have far too much discretion in deciding who to prosecute and when. On top of that, the uncertainty over what’s allowed and what’s forbidden eats up countless hours of productivity (and generates an endless stream of anxiety for the potentially liable). As Chase says in the video, “oftentimes you have to go all the way to the Supreme Court to find out whether you’ve committed a crime or not.”

“How to Become a Federal Criminal” echoes many of the same themes as Harvey Silverglate’s 2009 book “Three Felonies a Day: How the Feds Target the Innocent.” Silvergate argues that these days, not only is it possible to unwittingly violate some obscure federal law, but that it’s almost impossible not to violate multiple federal laws just by going through the habits of everyday life:

The average professional in this country wakes up in the morning, goes to work, comes home, eats dinner, and then goes to sleep, unaware that he or she has likely committed several federal crimes that day. Why? The answer lies in the very nature of modern federal criminal laws, which have exploded in number but also become impossibly broad and vague. In Three Felonies a Day, Harvey A. Silverglate reveals how federal criminal laws have become dangerously disconnected from the English common law tradition and how prosecutors can pin arguable federal crimes on any one of us, for even the most seemingly innocuous behavior.

Beating a people into submission doesn’t happen overnight. It proceeds in stages, and requires long-term leveraging of institutions and appeals to moral authority to justify ever-increasing levels of government coercion. Fortunately, it’s not a one-way street, and there are ways to fight back.

Playing the long game against such institutions requires character, perseverance, and courage. Few exemplify these virtues as much as famed civil rights attorney Harvey Silverglate, whom I interviewed for RealClear Radio Hour. You can listen to our conversation here.

Federal prosecution is inherently selective, because the majority of the adult population would be in jail if it weren’t.

As Chase, Silverglate, and many others have pointed out, many of these punishable violations are not the result of actions by Congress, but of rules written by regulators at federal agencies. Legislators often delegate a great deal of authority to the executive agencies and departments to write rules that have the force of law, without any subsequent review or approval. On top of that formal process, often called “notice-and-comment” rulemaking, which is ostensibly undertaken under the auspices of the Administrative Procedure Act of 1946, federal agencies are also known to go around that relatively time-consuming process by issuing “guidance documents,” which don’t have to be submitted for public comment. Competitive Enterprise Institute Vice President for Policy Wayne Crews calls this murky mass of documents “regulatory dark matter.” Wayne wrote about how to confront this phenomenon in “A Partial Eclipse of the Administrative State” last year:

Deterioration of checks and balances via regulatory overreach and over-delegation by Congress to agencies are central to most modern critiques of the administrative state. Less appreciated, though, is the extent to which administrative agencies can influence policy without going through the established rulemaking process. While there are a few dozen laws enacted annually alongside thousands of agency rules, agencies have issued reams of guidance documents consisting of general statements of policy and interpretive rules, as well as memoranda, interpretive bulletins, and other issuances—over the years that can carry regulatory weight.

Congress should both streamline such decrees and reaffirm that such policymaking via guidance is not binding. However, given that congressional action is both slow and unlikely in the short term, the president should issue a new executive order to highlight and strengthen the review and control of sub-regulatory guidance documents. This can tie together the threads of regulatory elimination, restraint and disclosure already adopted by the administration by addressing stealth rulemaking that falls through the cracks.

Fortunately, the current administration has moved to reform this process. The Department of Justice issued a memo last January that federal officials should not rely on guidance documents to trigger enforcement actions or prosecutions—only formally issued notice-and-comment rules can now be the cause of such proceedings. That policy contained in that memo however—itself, ironically, a guidance document—could easily be revoked by a future administration unless Congress passes legislation making permanent the regulatory reforms of the past few years (something like the Regulatory Accountability Act, for example, would be a nice start).