In yesterday’s New York Times, Tina Rosenberg looked at different ways to curb teen smoking. Her biggest recommendation was a law to make the world a little more ugly, and a little more boring. She wants to require “generic cigarette branding,” of the kind they will implement this year in Australia. Rosenberg describes it like this: 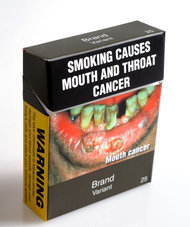 All cigarette packs will look alike – a generic olive-green, with big health warnings and the brand name written in small, standardized lettering. But the article was printed with this example image, neither generic nor olive-green, but gut-wrenchingly disgusting. The article makes a few key omissions.

She doesn’t mention the fact that while a generic-branding policy may have teens in mind, adults buy the same packs of cigarettes that teens do. Banning tobacco companies from branding their own cigarettes means they can’t market to adults either. It’s fair to demand that tobacco companies not advertise to children. We already do that. But it isn’t fair to demand that they not market their legal products to consenting adults.

But here’s the most upsetting, although perhaps the least surprising, omission in Rosenberg’s column: parents. She never once considers the idea that parents ought to be responsible for their own children.

Instead, Rosenberg and her ilk think that teen smoking is a problem that the government, or the tobacco companies, or even the movie industry, need to solve.

This is the mindset that gets us stuck with nanny-state regulations up the wazoo. This is why we have everything from minor annoyances like banning saggy pants to major catastrophes like Obamacare. It’s part of the reason that a new federal regulation gets published every two hours.

Rosenberg ignores the words of Dwight Eisenhower, who said, “We have never stopped sin by passing laws.” Hers is the attitude that responsibility for a person’s well-being belongs to the government, and not to that person. That attitude is destroying us.