Julian L. Simon (1932-1998) was a free-market economist and business professor known for his optimism about the future of mankind. His groundbreaking research built the case for how human ingenuity would allow the environment to support the world’s increasing population over the long-term, demonstrating human beings are an asset to the planet, not a liability.

Simon authored the 1981 classic, The Ultimate Resource, which debunked eco-doomsayers’ predictions that modern civilization is unsustainable. Over the years, he argued that humans are living longer, that people are better fed and healthier, that resources are becoming ever more abundant, and that environmental quality is improving.

To honor Simon’s achievements, the Competitive Enterprise Institute (CEI) established the Julian L. Simon Memorial Award in 2001. The recipient of the prize is an individual whose work continues to promote the vision of man as the ultimate resource.

The award is forged in the shape of a leaf. Simon admired nature and included dried leaves — which die every fall and are renewed every spring — in his correspondence. The veins of the leaf are chromium, copper, nickel, tin, and tungsten. The five metals featured in a famous 1980 bet with environmentalist Paul Ehrlich. Based on his positive theory about natural resources, Simon bet Ehrlich the price of the metals would decline over a decade even if the world’s population grew. Ten years later, Julian Simon won the bet.

The award is traditionally presented at CEI's annual dinner in Washington, D.C. 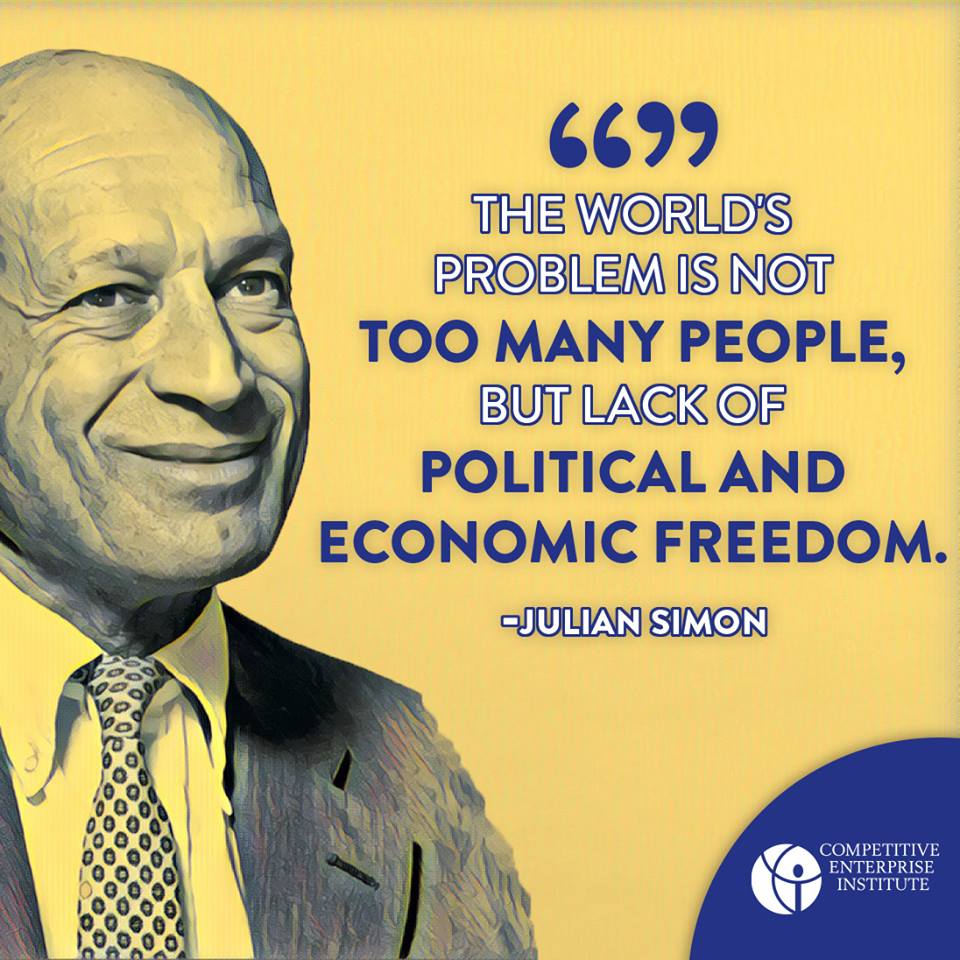 2018 - Hernando de Soto - Economist, author, humanitarian and founder and president of the Institute for Liberty and Democracy

2017 - Dr. Pierre Desrochers - Associate Professor of Geography at the University of Toronto

2012 - Matt Ridley - author of The Rational Optimist: How Prosperity Evolves

2010 - Ross McKitrick and Stephen McIntyre* - McIntyre is the founder and editor of Climate Audit and McKitrick is a professor of economics at the University of Guelph in Ontario, Canada

2007 - Indur Goklany - author of The Improving State of the World

2004 - There was no Simon award given. Instead, CEI honored Nobel Peace Prize Laureate Norman Borlaug with our first Prometheus Award for Human Achievement.

2002 - Robert L. Bradley, Jr. - CEO and founder of the Institute for Energy Research