Washington, D.C., June 1, 2012 – In a week that New York City’s mayor announced a planned ban on large-size sugary sodas, consumers have a chance to 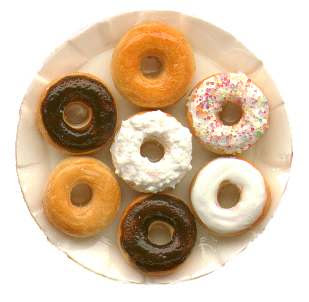 fight back – with donuts.  Friday is National Donut Day, created by the Salvation Army in 1938 to honor the American women who served donuts to soldiers in World War I. But now, it’s becoming a day to stand up to government food regulators.

“On National Donut Day, CEI urges people to enjoy two donuts — one for themselves and one for their freedom,” said CEI General Counsel Sam Kazman. We have politicians at every level viewing food as a way to expand both their powers and their taxes.  And today’s the perfect day to protest by indulging.”

“So-called junk foods can be part of a healthy diet,” added Michelle Minton, CEI Fellow in Consumer Studies.  “This holiday can be a reminder that it’s each individual’s responsibility—not the government’s—to decide what a healthy diet is and what works for them. Rather than demonizing certain foods we should be celebrating an era of human history in which we can worry about too much food as opposed to too little.”

Government meddling in Americans’ nutritional choices continues to mount, from congressional restaurant menu labeling mandates in Obamacare to FDA seeking “voluntary” cutbacks on salt, and now Mayor Bloomberg’s assault on sugary drinks.  Many U.S. states now impose surtaxes on politically disfavored food and drinks, while the Obama White House Task Force on Childhood Obesity proposed sweeping changes in community planning on nutritional grounds. Not only are these moves to regulate food based on questionable science, they undercut the founding principles of a free society.