The annual (sort of) Report to Congress on the Benefits and Costs of Federal Regulations and Agency Compliance with the Unfunded Mandates Reform Act (find it here) is where the federal government tells us what it reckons to be the “net-benefits” of the rules and regulations issued every year.

The Trump administration Office of Management and Budget (OMB) has just released the 2017 Draft edition.

This report has always been an interesting animal since its creation around the turn of the century.

The excitable Vox has informs us that Trump’s own OMB (the same one that in December touted the success of the one-in, two-out regulatory streamlining program) has issued a “report vindicating Obama regulations.” Not only that, the “OMB demolishes the GOP’s deregulatory claims.”

Is that so? The assertion that all the rules and regulations pouring out of Washington generate billions in positive net benefits is certainly long-standing. But there is actually no way, nor justification, to make such a claim for the overall regulatory enterprise overall.

First, it’s taken for granted that what agencies do is actually regulating. Regulation and discipline (for economic efficiency, health and safety, and environmental amenities and values) are not solely defined by a bureaucracy issuing rules; that is a progressive’s conceit. Besides regulatory cronyism and capture mean some rules favor the “regulated.”

So how much review of costs and benefits happens? We require that sense of proportion, and here it is: Less than a percent of rules boast cost-benefit analysis.

But 16 rules in one year, and 137 over ten? How representative can that be? In the report, OMB also tells us that:

From FY 2007 through FY 2016, Federal agencies published 36,255 final rules in the Federal Register. OMB reviewed 2,670 of these final rules under Executive Order 12866. Of these OMB-reviewed rules, 609 are considered major rules, primarily as a result of their anticipated impact on the economy (i.e., an impact of $100 million in at least one year).

How many and what proportion of rules have reviewed or audited, not just asserted, cost and benefit documentation that we know anything about whatsoever?

As my nearby chart, The Funnel of Gov: On the Depth of Regulatory Cost Review, 2001-Present (http://bit.ly/YSMF0u) makes clear, of several thousand executive agency major rules issued since 2001 (and of tens of thousands of non-major rules issued), just a relative handful get OMB-reviewed cost analysis, let alone cost-and-benefit analysis. 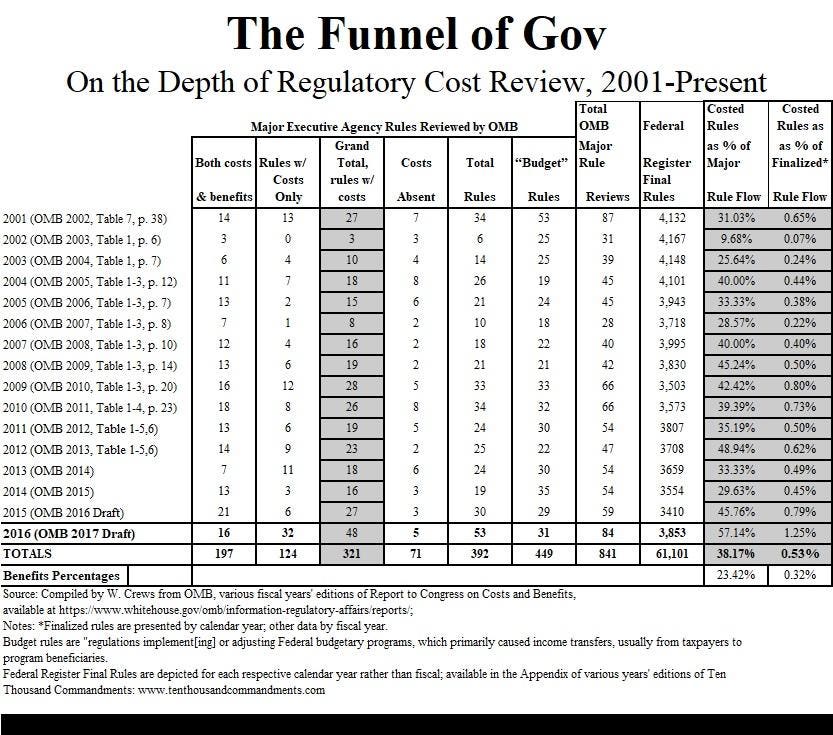 Here’s how costs and benefits of federal regulation shape up, according to OMB.

In fiscal year 2017, the White House Office of Management and Budget reviewed 84 major rules overall and, as in all years, a few hundred significant ones. Only 16, as already noted, had both cost and benefit estimates, and another 32 had cost-only estimates  But for comparison, during the calendar year 2016, there were 3,853 rules finalized by 60 federal departments, agencies and commissions.

Overall, the proportion of rules deemed “major” with reviewed cost analysis now averages about 38 percent for the duration.

However, when we go beyond the officially designated major rules, the proportion of all rules with any reviewed cost analysis averages only around 0.53 percent, as the chart shows.

Now, it must be pointed out that — large regulatory output in 2016 aside — Obama’s final full fiscal year did generate the greatest percentages of major and overall rules featuring cost analysis, as the chart shows. (The overall peak before was 0.8 percent in 2009.) But the totals are still low.

Benefit assessments, which the federal government declares justifies the modern regulatory apparatus, fare even worse, yet net-benefit assertions for the whole regulatory enterprise are common, as seen in the Vox story cited above. In fact the most glaring shortfall of this annual report is that administrations (not just Obama’s) tend to declare net-benefits of the entire regulatory enterprise on the basis of such a small handful of rules.

Sure, regulators claim that the “major” rules reviewed account for the bulk of regulatory costs; but regulators themselves decide what counts as major.

As Susan Dudley, the former director of the OMB Office of Information and Regulatory Affairs that issues this very report, said:

First, OMB’s figures are not independent estimates, but tallies of estimates agencies presented to justify individual rules at the time they were issued. Regulators naturally want to present their rules in the best light, and they rely on hypothetical models and assumptions to project benefits that exceed costs.

Furthermore, OMB does not review independent agency rules, like the Federal Communications Commission’s net neutrality order (now fortunately being rolled back) or the many financial sector rules. Entire categories of oversight or intervention (such as antitrust or federal control of common like spectrum or airspace or commercial space operations) get no scrutiny. And we stopped counting so-called transfer or “budget rules” (there are 31 of these, noted in the chart) as regulatory phenomena with costs, even when the federal government takes over the bulk of retirement and senior health care. Washington’s expansion of middle-class dependency on the federal government is about as fundamental as social regulation gets.

Still further, costs of “regulatory dark matter” like agency memoranda, guidance documents, bulletins, circulars, and manuals don’t get tallied. In fact, with the latter, why bother writing regulations that OMB might get nosy about?

Finally, the Regulatory Right-to-Know Act requires an aggregateregulatory cost estimate for all rules, not just OMB’s ten-year one for “major” rules, by my reading of it.

Note that we’re now in fiscal year 2018, and this “draft 2017” report only covers through September 2016, during former president Barack Obama’s term. The schedule for these Report to Congress publications has steadily deteriorated, with Trump’s the latest ever; and we still do not even have the final 2016 report. Until Obama, the report has appeared most frequently in March, and usually by April at the latest (see chart here). We should be getting draft 2018 report this month or next.

The lack of clarity on the real costs and benefits of regulation and their effect on jobs has a factor driving the push for regulatory liberalization on Capitol Hill and in the executive branch. While policymakers wouldn’t dream of doing away with the fiscal budget that tracks government spending, a lack of transparency and accountability for regulatory costs prevails.

This is why Congress must take seriously the requirement that both rules and agency guidance documents must be formally presented to Congress and the Government Accountability Office for purposes of the Congressional Review Act’s “resolution of disapproval” process. The next step is to provide for points of order for Congress to object to any rule, rather than merely objections to major or economically significant rules tied to cost estimates. As we see, we don’t get those cost estimates on a reliable enough basis for such calculations to be the governing criterion.

In contrast to OMB’s few dozen billion in costs over ten years for discete rules, other estimates consider the broader aggregates that OMB used to contend with (and is supposed to, still). A 2014 National Association of Manufacturers modeled 2012 total annual regulatory costs in the economy of $2.028 trillion in 2014 dollars. My own reckoning using largely government data is $1.9 trillion annually. A Mercatus Center study finds GDP could be $4 trillion higher if regulation had frozen in place a few decades ago.

The Trump administration has promised to reduce the flow of new rules and to roll back rules on the books. The next edition of the Report to Congress will capture some of the Trump era and might tell a more interesting tale.

Read this article at Forbes.