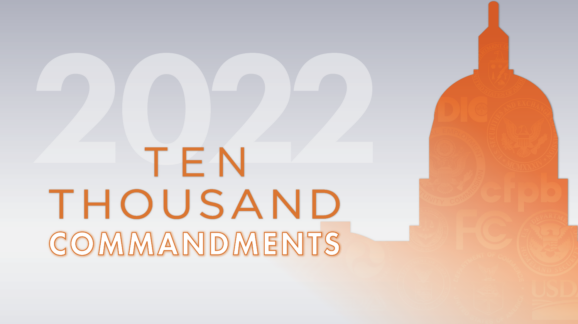 Along with presidential proclamations are those of departments and agencies. Without actually passing a law, government can signal expectations, specify parameters for, and influence various industries—including health care, retirement, education, energy production, finance, land and resource management, science and research, and manufacturing—through various kinds of guidance documents. A prominent Obama-era example is the Internal Revenue Service’s granting of waivers of the Patient Protection and Affordable Care Act’s employer mandate, despite the statute’s language. In one assessment of guidance documents, a 2018 report by the House Committee on Oversight and Government Reform found at least 13,000 guidance documents that had been issued since 2008. Trump sought to address these in 2019 via Executive Order 13891, “Promoting the Rule of Law through Improved Agency Guidance Documents,” which established inventories of guidance documents by way of required online rule portals at each agency. The overall count, far from complete, eventually topped 70,000, which is derived from this author’s September 2020 survey of agency portals. These portals and disclosures were eliminated by Biden.

In addition to the Federal Register’s final and proposed rules, public notices issued throughout the year also appear in the Federal Register. These typically consist of non-rulemaking documents such as meeting and hearing notices and agency organizational material. The tens of thousands of yearly public notices can also include memoranda, bulletins, guidance documents, alerts, and other proclamations that may be consequential to the public. Reporting of guidance in the Federal Register was never reconciled with agencies’ guidance document portals prior to Biden’s elimination of the project. There simply was not enough time, although doing so could be a goal for a future administration.

Yet, notices are not always trivial. Policy makers should pay greater attention to the “notices” component of the Federal Register given the tendency for regulation to advance via memorandum, notice, letter, bulletin, and other means. Increased unilateral executive proclamations, atop traditional rules and regulations, will render costs and effects of regulation even less transparent than they already are, especially if they do not appear in the Federal Register. For example, as the House Oversight Committee detailed in the 2018 report, Shining Light on Regulatory Dark Matter, of at least 536 known significant guidance documents issued since 2008, only 328 were submitted to OMB for review. Furthermore, while more than 13,000 guidance documents should have been submitted to both Congress and to the Government Accountability Office as required by the Congressional Review Act, only 189 had been. The Trump-era portals could have added clarity. Read Chapter 5: The Presidential Dimension of Regulatory Dark Matter: Executive Orders and Memoranda
Read Chapter 7: A Note on Notice and Rule Reviews at OMB’s Office of Information and Regulatory Affairs
Navigate to the 10kc main page