The Federal Register is the daily repository of all proposed and final federal rules and regulations. Although its number of pages is often cited as a measure of regulation’s scope, there are grave problems with relying on page counts. A short rule may be costly and a lengthy one may be relatively cheap. The Federal Register also contains many administrative notices, corrections, rules relating to the governance of federal programs and budgets, presidential statements, and other material. They all contribute bulk and bear some relation to the flow of regulation, but they are not strictly regulations. Blank pages, skips, and corrections also affect page counts. In previous decades, blank pages numbered into the thousands owing to the Government Publishing Office’s imperfect estimation of the number of pages that agencies would require.

The first calendar year of the Trump administration finished with 61,308 pages in the Federal Register (see Figure 9). The last time the annual page count had been that low was in 1993, at 61,166 pages, during the Clinton administration.

The 2017 count also contains three weeks of Obama administration output. By the time Trump was inaugurated on January 20, 2017, the Obama administration had already added 7,630 pages to the Federal Register, making Trump’s “net” page count 53,678. The new 2020 tally of 86,356 pages is a striking 41 percent above Trump’s first-year count.

For comparison, at the end of 2016, Obama’s final calendar year, the number of Federal Register pages stood at 95,854, which was the highest level in the history of the Federal Register, and a 19 percent jump over Obama’s own second-to-last year’s count. Trump’s 2017 count was 36 percent below that Obama record. The last time a drop in Federal Register page counts of the Trump magnitude happened was when Ronald Reagan reduced the count from Jimmy Carter’s 73,258 in 1980 to 44,812 by 1986, but that 28,446-page drop took five years to materialize. Isolating the pages devoted to final rules might be more informative than gross page counts, since doing so omits pages dedicated to proposed rules, agency notices, corrections, and presidential documents (although those can have regulatory effects, too).

The number of pages devoted to final rules in 2018 stood at 16,378, the lowest count since 1992. In contrast, Trump’s final year set the second-highest count of all time at 32,223. Nonetheless, apart from the astonishing 55 percent jump between 2019 and 2020, two things stand out in Figure 10. First is the 56 percent jump between 2015 to 2016 under Obama. Those spikes under both Obama and Trump are consistent with the longstanding bipartisan midnight rule tradition (arguably in part deregulatory, in Trump’s case). Second was the notable drop of 51 percent between Obama and Trump. Obama’s 2016 high was a record that shattered 2013’s then peak of 26,417 by 46.3 percent.

Some rules are bulkier than others. The Safer Affordable Fuel-Efficient, or SAFE, Vehicles Rule for Model Years 2021–2026 alone clocked in at 1,105 pages.

Although there are more relevant measures than page counts of final rules to account for actual effects or burdens, for page counts to drop so steeply between administrations, or to jump at transition time, is significant. Still another way of looking at Federal Register trends is by pages per decade (see Figure 11). Even with Trump’s reductions, a hefty jump over the prior decade is apparent. The second-to-last bar of Figure 11 shows that the just-ended decade of the 2010s saw 775,734 new Federal Register pages, for an average of 77,573 pages added per year. The prior decade had yielded 730,176 pages and an average of 73,018 pages per year. Trump’s final year total was 87,012. Nonetheless, even with the page-count reduction during Trump’s administration, page counts could easily top 1 million in the coming decade. That expectation is reinforced by the shift in federal regulatory policy asserted in President Joe Biden’s “Modernizing Regulatory Review” directive and his “climate crisis” regulatory campaign.

Despite the fattened 2020 Federal Register, the Trump administration managed to reduce the annual number of rulemakings in each of its four years to the lowest levels ever recorded. Even with Trump’s record Federal Register page count upon exit, the 3,353 rules contained within were surpassed by every other president since records began being kept in the 1970s. And again, some of those Trump rules were deregulatory. The Federal Register does not distinguish between regulatory and those intended to be deregulatory. Here, we assess them based on the Unified Agenda, but there is no direct mapping between the Agenda and the Register (which is one of many needed reforms). This slowed pace of traditional rulemaking (as opposed to Trump’s sweeping impulses on antitrust, trade, tech policy, family leave social policy, and other areas that are not easily tracked in OMB reviews) was a major development defining the Trump administration. The 2,964 rules from Trump in 2019 made for the lowest count ever, and the only count below 3,000, since record keeping began in the 1970s. Trump’s final year of 2020 concluded with 3,353 rules (see Figure 12). Midnight rule flurry notwithstanding, Trump’s tally here is exceeded by all other presidents, so it remains one of the historically lowest. That low count can be said to be offset by the approximately 202 final rules attributable to Trump between New Year’s Day and Inauguration Day, January 20, 2021, but even some among those were deregulatory in nature.

In 2016, the final full year of the Obama administration, the number of final rules published in the Federal Register reached 3,853. That had been the highest total of the Obama administration and the highest level since 2005. Under Trump, final rules dipped to 3,281 in 2017, then the lowest count since records began being kept. Additionally, Obama issued 207 in January 2017 before Trump’s inauguration, which leaves Trump with a “net” of 3,074 for that year. In 2018, Trump’s rule count bumped up to 3,368. Of the aforementioned 2019 tally of 2,964 final rules, some were deregulatory in character, which implies even lower levels of finalized regulation. The number of final rules being published in the current era is lower than it was throughout the 1990s, when the average annual total of final regulations was 4,596. The average for the period 2000–2009 was 3,948. Even Obama’s highest counts fell well below those levels. Of course, not all rules are created equal, and fewer of Obama’s rules would be expected to have been devoted to streamlining like Trump’s one-in, two-out directive. Note again that deregulatory actions by Trump that require notice and comment added to his final and proposed rule counts.

Rules deemed broadly “significant” warrant attention. They make up a broader classification than economically significant rules, defined as those deemed to impose $100 million in annual costs. Among Obama’s 3,853 final rules in 2016, 545 were deemed “significant” under Executive Order 12966, the highest count over the past two decades. While several hundred “significant” final rules each year are common, that changed dramatically under the Trump administration. Trump issued 214 in 2017, 114 in 2018, 69 in 2019, and 79 in 2020, the lowest levels since 2006’s 179 significant finals rules.

More detailed analysis of proposed rules, on an ongoing basis, can add some clarity to future expected regulatory cost burdens. Stopping or slowing incomplete proposed rules in the pipeline is easily done, and all recent presidents have done so. And it is obviously easier than eliminating existing rules. It would be useful for the Federal Register to flag which final and proposed rules are deregulatory as opposed to regulatory. This was done in the Unified Agenda under Trump, and it remains to be seen whether Biden continues this disclosure. That practice allows clearer analysis of both the routine and the significant among forthcoming rules, since the quantity of both can be a leading indicator of reductions or increases in final rules yet to come. In Obama’s final year of 2016, 2,419 proposed rules appeared in the Federal Register (Figure 12). In Trump’s first year, the count fell to 1,834 (including the approximately 156 issued by Obama during the first three weeks of 2017), which remains the lowest count since record keeping began. Those rules stood at 2,098 in 2018, 2,131 in 2019, and 2,149 in 2020. Trump’s midnight rule activity notwithstanding, these levels of proposed rules never attained those of prior years (except for exceeding the 2009 Obama count of 2,044), although this final count is amplified by the approximately 90 proposed rules the Trump administration proffered before Inauguration Day 2021. Indeed, in the 1990s, much greater numbers of proposed rules appeared in the annual pipeline. (For the numbers of proposed and final rules and other documents issued in the Federal Register since 1976, see Appendix: Historical Tables, Part B.)

The fact that records of proposed and final rules were not kept until the latter half of the 1970s—three decades after the Administrative Procedure Act became law—is indicative of the need for greater accountability for the administrative state.

The page count for final rules in the Code of Federal Regulations (CFR) is not as dramatic as the yearly count of tens of thousands of pages in the Federal Register, but it is still considerable. In 1960, the CFR contained 22,877 pages. Since 1975 until the end of 2019, its total page count had grown from 71,224 to 185,984, including the index—a 161 percent increase. The number of CFR bound volumes stands at 242 for the past four years, compared with 133 in 1975. (See Figure 14. For the detailed breakdown numbers of pages and volumes in the CFR since 1975, see Appendix: Historical Tables, Part C.) 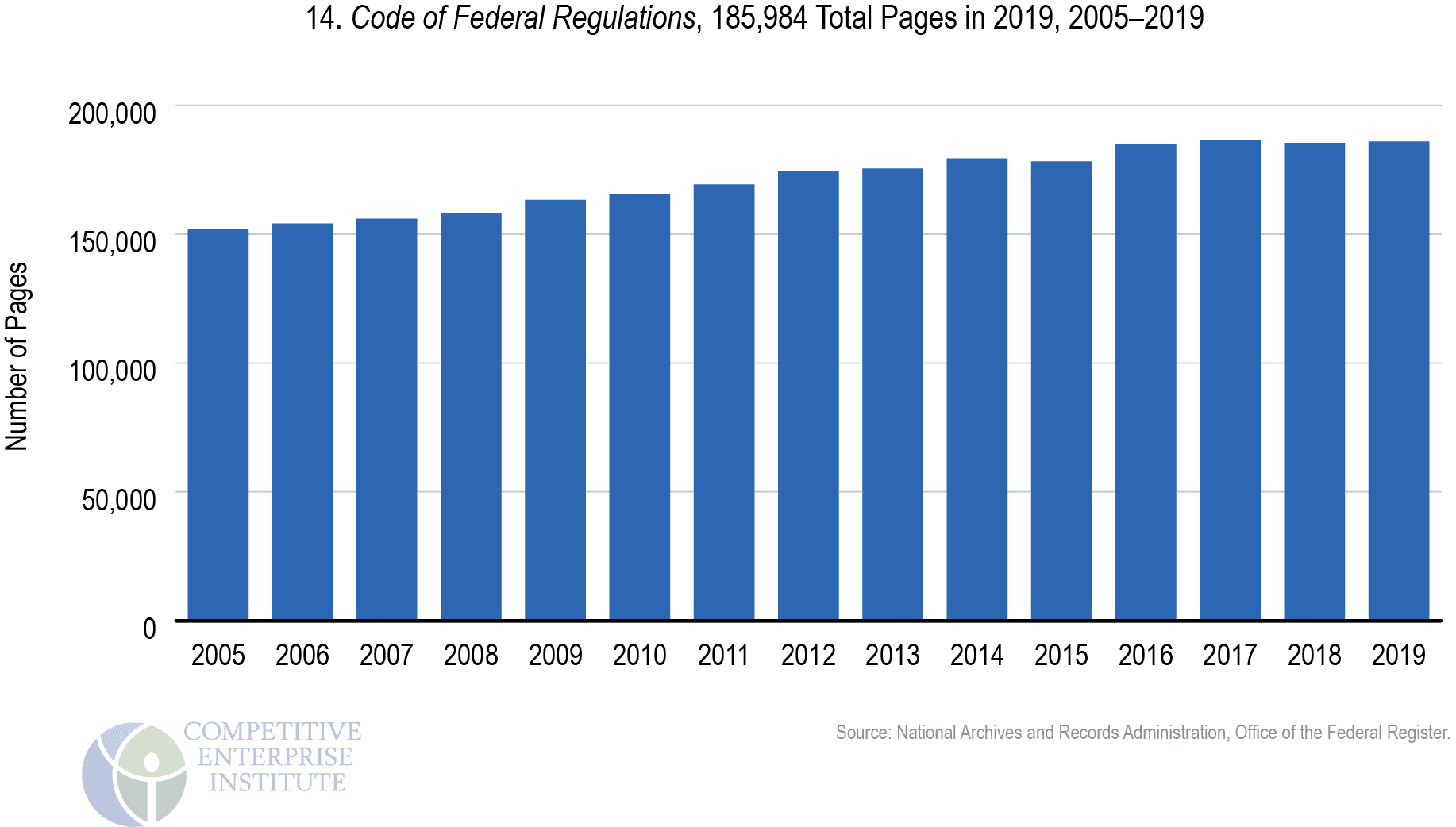 As noted, in recent years, traditional rules and regulations have been supplemented in significant part by various forms of executive actions and regulatory guidance documents. Those are important to track, but there is no CFR-style repository for them. Trump’s Executive Order 13981, “Promoting the Rule of Law through Improved Agency Guidance Documents,” in 2020 began the process of creating an inventory, but Biden interrupted that effort.