Climate campaigners demand ever-greater government control over energy markets, resources, and infrastructure. Many believe the best thing governments can do with fossil energy is “keep it in the ground.” They claim fossil-fueled civilization is “unsustainable” and headed for a climate catastrophe. Are they correct?

Prediction is difficult—especially about the future! Nonetheless, an abundance of information from high quality sources, like Our World in Data, reveals that the long-term trends in human health and welfare are strongly positive.

According to the U.N. Intergovernmental Panel on Climate Change (IPCC), warming of the climate system is “unequivocal” and “it is extremely likely that human influence has been the dominant cause of the observed warming since the mid-20th century.”

So, let’s look at trends in human health and welfare during the period from 1950 to the present.

Improving State of the World How has humanity fared during this period? Many activists claim global warming will make insect-borne diseases like malaria more prevalent. However, since the year 2000, global malaria infections are down 37 percent and malaria-related deaths are down 62 percent. Climate is a factor in mosquito biology. Warmth tends to expand mosquito habitat and accelerate mosquito breeding cycles. However, malaria risk is chiefly a function of poverty, not of climate. The late 19th century was certainly colder than today. But in the 1880s, malaria was endemic to such frosty northern states as Montana, North Dakota, and Minnesota. In the early 1920s, malaria killed 30,000 Russians in Archangel near the Arctic Circle. Some scientists claim warming will depress crop yields. Yet global yields for wheat, corn, and soy have been increasing since 1960. U.S. corn yields increased by 25 percent since 2000, 44 percent since 1990, and 88 percent since 1980. A recent Michigan State University study reports U.S. corn production “has steadily increased by an average of two bushels per acre every year for the past 40 years.” Thanks partly to higher yields, global per capita food supply increased by 6 percent since 2000 even though global population increased by 17 percent. Similarly, the global percentage of undernourished people declined from 15 percent to just under 11 percent. What about quality of life? From 2000 to 2016, per capita GDP increased by 54 percent in Latin America, 62 percent in Africa, and much higher percentages in Asia. As a consequence, the share of world population living in extreme poverty declined by 55 percent despite an increase in global population of 1.3 billion. Life years lost due to disability and disease also declined for all age categories, especially children. To be sure, hundreds of millions of people are still hungry and poor, and millions die each year from preventable diseases. But the trends are moving in the right direction—in spite of climate change. Why is that?

For starters, the warming rate is gradual and fairly constant, not rapid and accelerating, as it’s often claimed.

The U.N.-approved models used to project climate change impacts overshoot the observed warming by up to five times as much as has actually occurred in the tropical troposphere—a region where greenhouse theory expects the most rapid warming to occur. There are several possible explanations for the discrepancy between models and observations, but a reasonable one, notes Cato Institute scientist Patrick Michaels, is simply that the models are tuned too hot. They overestimate climate sensitivity—the amount of warming expected to occur from a doubling of CO2 concentrations. The average sensitivity in IPCC climate models is 3.4°C. The average in many recent studies is 2°C. If we use the most accurate model, called INM-CM4, and run it with a realistic emissions scenario in which natural gas continues to replace coal as an electricity fuel, the world warms about 1.5°C by 2100. In other words, humanity achieves the Paris climate treaty’s maximum goal but without any additional climate policies. Climate change is not “worse than we thought,” but better than they told us. Despite relying on climate models that run too hot, the IPCC’s Fifth Assessment Report tacitly rejects the catastrophe narrative popularized by Al Gore and other climate campaigners. Specifically, the IPCC concludes (AR5, Ch. 12, Table 12.4) that in the 21st Century, Atlantic Ocean circulation collapse is “very unlikely,” ice sheet crackup is “exceptionally unlikely,” and catastrophic release of methane from melting permafrost is “very unlikely.” 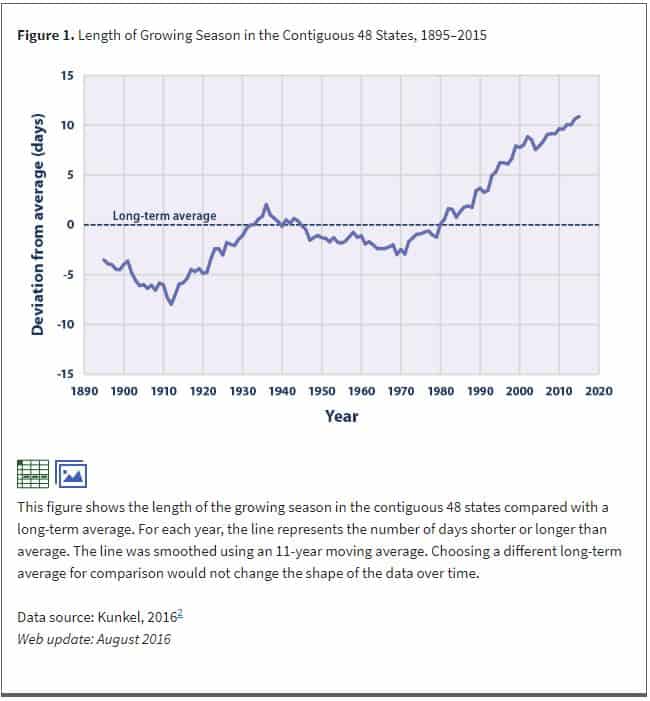 In 2016, a team of 32 researchers from 24 institutions in eight countries used NASA satellite data to measure changes in “leaf area index, or amount of leaf cover, over the planet’s vegetated regions” during 1982-2015. They found an “increase in leaves on plants and trees equivalent in area to two times the continental United States.” The CO2 fertilization effect accounts for 70 percent of the greening trend, with nitrogen deposition (another fossil-fuel byproduct) and anthropogenic warming accounting for 17 percent. Has any climate policy done even a small fraction as much good for the planet?

Climate researcher Craig Idso, using a large database on carbon dioxide-enrichment experiments and Food and Agriculture Organization economic data, estimates that CO2 emissions added $3.2 trillion to the value of global agricultural output since 1961. Has any climate policy done even a small fraction as much good for people?

Perhaps the most important reason trends in human well-being are improving despite climate change is that wealth creation and technological innovation make societies better able to manage climate-related risks. For example, since 1990, weather-related losses as a share of global GDP declined by about one-third. Since the 1920s, climate economist Indur Goklany reports, global deaths and death rates related to extreme weather decreased by 93 percent and 98 percent, respectively. As fossil fuel consumption increased, the environment became more livable and human civilization more sustainable. That’s not a coincidence. Energy scholar Alex Epstein explains: Human beings using fossil fuels did not take a safe climate and make it dangerous; they took a dangerous climate and made it safer.

For example, for millennia, drought was the most lethal form of extreme weather because it limits access to food and water. Since the 1920s, global deaths and death rates related to drought decreased by 99.8 percent and 99.9 percent, respectively. Climate campaigners hype the risks of global warming and belittle, ignore, or deny the benefits of fossil fuels. Would their so-called climate solutions—carbon taxes, cap-and-trade, renewable energy quota, fracking bans—make us safer or the reverse?

Pick almost any climate policy on the books, and you will find an abysmal benefit-cost ratio. For example, the Obama administration’s Clean Power Plan would avert less than two-hundredths of a degree Celsius of global warming by 2100. That’s according to the EPA’s climate simulator, a model aptly named MAGICC. Yet achieving that miniscule result would cost tens to hundreds of billions of dollars in compliance burdens and economic fallout.

The stock rejoinder is that if the whole world implements such policies, we can take big bites out of global warming. Perhaps, but then the problem is that any truly ambitious global program of fossil-fuel suppression is potentially a humanitarian disaster.

For example, according to the IPCC’s overheated climate models, the Paris Agreement’s central goal, which is to keep global warming below 2°C, will require reducing global carbon dioxide emissions 40-70 percent below 2010 levels by 2050. There is no known way to do that without compelling developing countries to make substantial reductions in their current consumption of fossil fuels. More than 1 billion people in developing countries have no access to electricity and billions more have too little to sustain development. Putting energy-starved peoples on an energy diet would trap millions in poverty and slow the march of progress to a cleaner, healthier, more peaceful world. It is a cure worse than the disease. Consequently, developing countries will not consent to implement it.

Unfortunately, vast resources may be diverted from far more beneficial investments before climate change loses its mystique as a pretext to expand government and empower progressive elites.