Environmental scientist Dana Nuccittelli accuses University of Alabama in Huntsville (UAH) atmospheric scientist John Christy of “manufacturing doubt about the accuracy of climate models” at a May 13 hearing before the House Natural Resources Committee. Nuccitelli claims Christy’s testimony “played rather fast and loose with the facts.” Those allegations are incorrect. 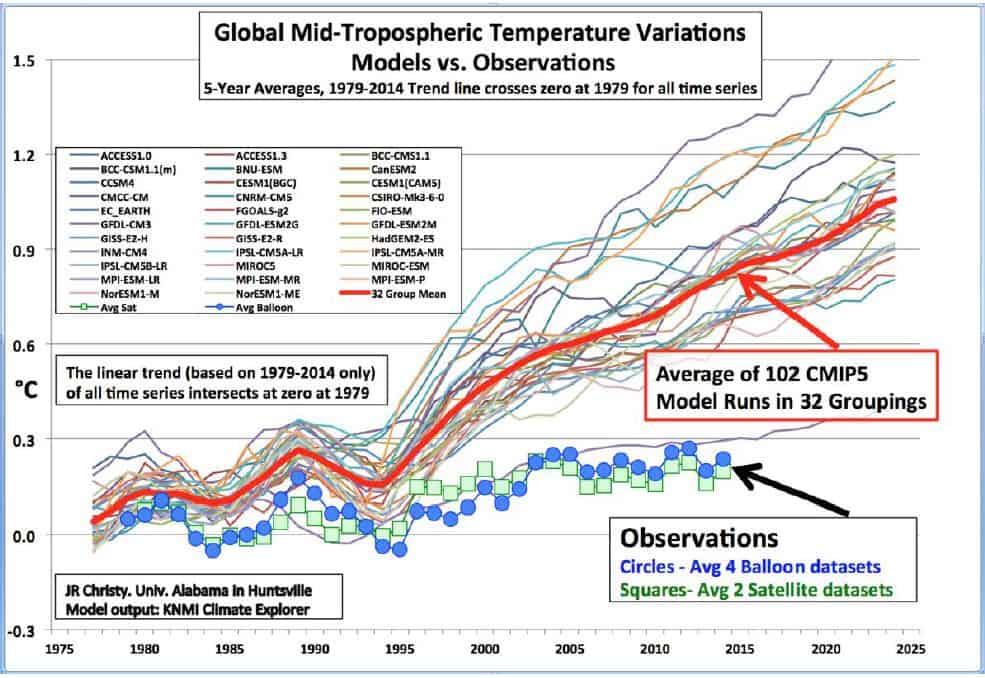 Christy reasonably concludes the models are not accurate enough to inform policymaking:

On average the models warm the global atmosphere at a rate three times that of the real world. Using the scientific method we would conclude that the models do not accurately represent at least some of the important processes that impact the climate because they were unable to “predict” what has occurred. In other words, these models failed at the simple test of telling us “what” has already happened, and thus would not be in a position to give us a confident answer to “what” may happen in the future and “why.” As such they would be of highly questionable value in determining policy that should depend on a very confident understanding of how the climate system works.

So how is that playing fast and loose? According to Nuccitelli, “Christy showed a graph of only mid-troposphere temperatures. The mid-troposphere is the atmospheric layer from about 25,000–50,000 feet, or about 8–15km in altitude.” That’s irrelevant, he suggests, because “Humans live in the lower troposphere, not the mid-troposphere.” Nuccitelli further claims “climate models have done a good job matching the observed temperature change at the surface and in the lower troposphere, where humans live.” He concludes: “We understand the workings of the Earth’s climate much better than Christy suggests, especially where it matters most to humans.”

Nuccitelli’s critique fails on three counts. First, as indicated in the text of Christy’s testimony, the graph shows temperature variations in the “bulk atmospheric layer known as the troposphere, roughly from the surface to 50,000 ft. altitude.” In other words, the graph shows temperature variations in the lower- and mid-troposphere combined. The claim that Christy only compared modeled and observed temperatures where nobody lives, is incorrect.

Second, at my request, Christy kindly provided a graph comparing modeled and observed temperatures in the lower troposphere. Again we see a significant and increasing divergence between models and observations. An additional 1°C warming is at or below the low end of three of the IPCC’s four warming projections, called representative concentration pathways, for the 21st century (AR5 Summary for Policy Makers, p. 18). It is also smack dab in the middle of the IPCC’s lowest warming projection (RCP2.6), which assumes a 70% reduction in cumulative greenhouse gas emissions from 2010 to 2100 compared to baseline projections. In short, satellite data show about the same warming rate that climate campaigners urge policymakers to achieve via draconian restrictions on carbon-based energy.

To sum up, Christy presents an honest, apples-to-apples comparison of modeled and observed temperatures in the bulk atmosphere (0-50,000 feet). Climate models significantly overshoot observations in the lower troposphere, not just in the layer above it. Christy is not “manufacturing doubt” about the accuracy of climate models. Rather, Nuccitelli is manufacturing alarm by denying the models’ growing inconsistency with the real world.

I’ll let Cato Institute scientist Patrick Michaels have the last word on the graph from Christy’s testimony against which Nuccitelli rails: “It’s impossible, as a scientist, to look at this graph and not rage at the destruction of science that is being wreaked by the inability of climatologists to look us in the eye and say perhaps the three most important words in life: we were wrong.”