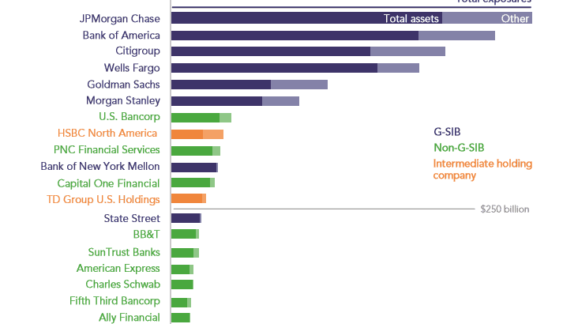 What makes a bank risky?

While a simple question, the answer is anything but. As the 2008 crisis proved, managing risks in the financial system is far from straightforward and rarely easy to predict. What should be obvious, however, is that there is not a single magic aspect that pinpoints risk.

Yet, Congress has a different take. The Dodd-Frank Act of 2010 determined that there is a magic line – a bank’s asset size. Currently, any bank with over $50 billion in assets is considered a systemically important financial institution (SIFI) and faces heightened prudential regulation. As a result, many run-of-the-mill regional banks are regulated in a similar manner to trillion-dollar Wall Street firms.

Fortunately, a bipartisan bill that would reform the SIFI designation process was recently voted out of the Financial Services Committee. Instead of an arbitrary $50 billion asset threshold, the “Systemic Risk Designation Improvement Act” would require regulators to assess whether medium sized institutions pose the same threat to the financial system as complex, trillion dollar banks.

Just take a look at the stark difference in the total assets and exposures of SIFI banks in the figure below. Size, let alone a menial level of $50 billion, does not effectively address the risk profile of banks. A report released yesterday from the Office of Financial Research, a non-partisan federal government agency, confirmed the widely held belief that “bank size alone does not equate to risks a firm may pose to financial stability.” The OFR recommends, as I have in previous blog posts here and here, that such heightened prudential regulation should be tailored to institutions through a multifactor approach that determines systemic importance. This would include a bank’s activities, complexity, and interconnectedness with other institutions, as opposed to a pure asset threshold.

To be clear, this approach is not perfect. It would be preferable to eliminate the SIFI designation entirely. Nominating institutions as “too big to fail” and guaranteeing their bailout by the taxpayer encourages banks to act riskier than they otherwise would. This is especially inappropriate for banks that are objectively no risk to the financial institution at all. Further, the process assumes that regulators are able to effectively manage and predict risks in the financial system, which was the same assumption leading up to the 2008 crisis, creating a false sense of security that encourages complacency rather than rigorous risk management. It also has nothing to say about the swath of subsidies that encourage risky behavior, such as federal deposit insurance.

But a tailored approach to SIFI designations is drastic improvement over the status quo. A simple asset threshold captures numerous banks that are widely perceived to be no threat to financial stability. It also distorts the growth decisions of banks, discouraging some from growing beyond the limit, while encouraging others to grow too quickly or merge with other institutions to benefit from regulatory economies of scale.

Forcing regulators to determine systemic risk based on a range of measures will result in substantial relief for numerous small and medium sized banks. It will also allow for stakeholders to scrutinize the process by which a bank is designated a SIFI. Systemic risk is a complicated measure, and institutions should be able to make the case for why a SIFI designation is inappropriate, or change their business model accordingly.

With the Office of Financial Research supporting reform of such a one-size-fits-all approach, Congress should take note and pass the Systemic Risk Designation Improvement Act.