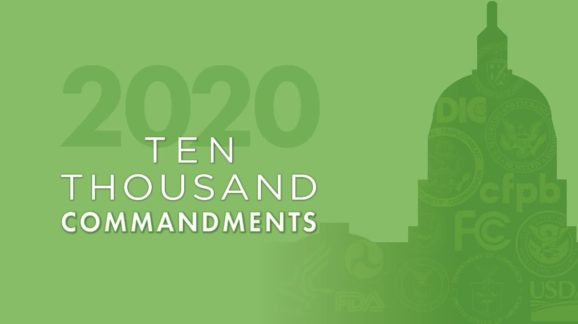 The Competitive Enterprise Institute (CEI) today released the 2020 edition of Ten Thousand Commandments: An Annual Snapshot of the Federal Regulatory State (10KC 2020), CEI’s annual survey of the size and scope of the federal regulatory burden. The report takes on special importance, given regulation’s starring role in the coronavirus response.

When the COVID-19 pandemic hit, policy makers almost immediately began lifting hundreds of regulations that were blocking access to health care, and preventing businesses from adapting to the lockdown. Many of these regulations were never needed in the first place. Many more harmful rules are still on the books. But how much total federal regulation is there? How much does it all cost? What system-level reforms can prevent never-needed rules from creeping back? To address these big-picture questions, CEI Vice President for Policy Wayne Crews compiles the annual report Ten Thousand Commandments: An Annual Snapshot of the Federal Regulatory State.

Crews estimates that that federal regulations cost a total of $1.9 trillion annually, based on publicly available data from government, academia, and industry. The economic burden is not much less than the $2.5 trillion Phase 3 stimulus bill Congress recently passed. Moreover, $1.9 trillion is an intentionally conservative estimate. There are vast information gaps in government reporting, and it is difficult or impossible to quantify intangible costs such as loss of freedom, regulatory uncertainty for entrepreneurs and businesses, and shifts to inferior alternatives that regulation can cause.

“Despite the progress made on regulatory reform under President Trump, America’s regulatory state is still causing major problems in America’s pandemic response. Over-regulation will make the coming recovery far more difficult than it needs to be,” said Crews. “And that progress is further threatened by President Trump’s own regulatory impulses on issues ranging from antitrust enforcement to trade restrictions to media content regulation, and more.”

Regulatory reform has taken on a new urgency in the wake of the coronavirus. Crews suggests several reforms across the government:

“It is not enough to get rid of specific rules. The rulemaking process itself, which lets harmful rules pass and prevents their reform, needs urgent attention. Congress, the President, and agencies need to work together right now to enact system-level reforms. These will help immediately with the virus response, will aid economic rebuilding, and will ensure that the government won’t be caught flat-footed against the next crisis.

“Executive Orders should permanently repeal recently-waived regulations that were harming the coronavirus response, and require sunsets for new regulations so they don’t become obsolete over time. Agencies should publish annual regulatory report cards with standardized, searchable information on costs of existing and upcoming rules. Congress and the President should establish an independent regulatory reform commission to comb through the 185,000-page Code of Federal Regulations and put together annual packages of old-timey rules to repeal. Congress should hold votes on new major agency regulations to make sure they are in line with congress’ legislation. These are the types of reforms that will keep America resilient against COVID as well as future crises, and ensure a lasting economic recovery.”

Highlights in the 2020 edition of Ten Thousand Commandments include: