How Many Rules And Regulations Do Federal Agencies Issue?

How Many Rules And Regulations Do Federal Agencies Issue?

With Congress on summer vacation, it's an appropriate time to reflect on the number of laws it passes vs. the number of rules and regulations put out by the hundreds of federal agencies they (are supposed to) oversee.

There's been much talk in the new Donald Trump administration about cutting regulations, speeding up construction permitting, executive branch reorganization and the like.

There's also been talk of the "administrative state" (some have said "deep state") and the reality of agency bureaucrats digging in their heels to slow down Trump's reforms (with media sympathy: only some seven percent are Republicans) .

But these things matter no matter who's president, because increasingly, since the federal government is so pervasive, it can regulate private activity without waiting for Congress to pass a law, and without even going through the normal notice-and-comment rulemaking process to which agencies "must" adhere. That threatens conservative and liberal values alike.

The bottom line is that in today's America, most binding rules comes from agencies (unelected) rather than elected lawmakers.

Let's look at year-end 2016 for starters. Federal departments, agencies, and commissions issued 3,853 rules in 2016, while Congress passed and the president signed 214 bills into law—a ratio of 18 rules for every law.

The average has been 27 rules for every law over the past decade (see chart nearby). Naturally, the rules issued in a given year are typically not substantively related to the current year’s laws, since agency output represents ongoing implementation of earlier legislation. 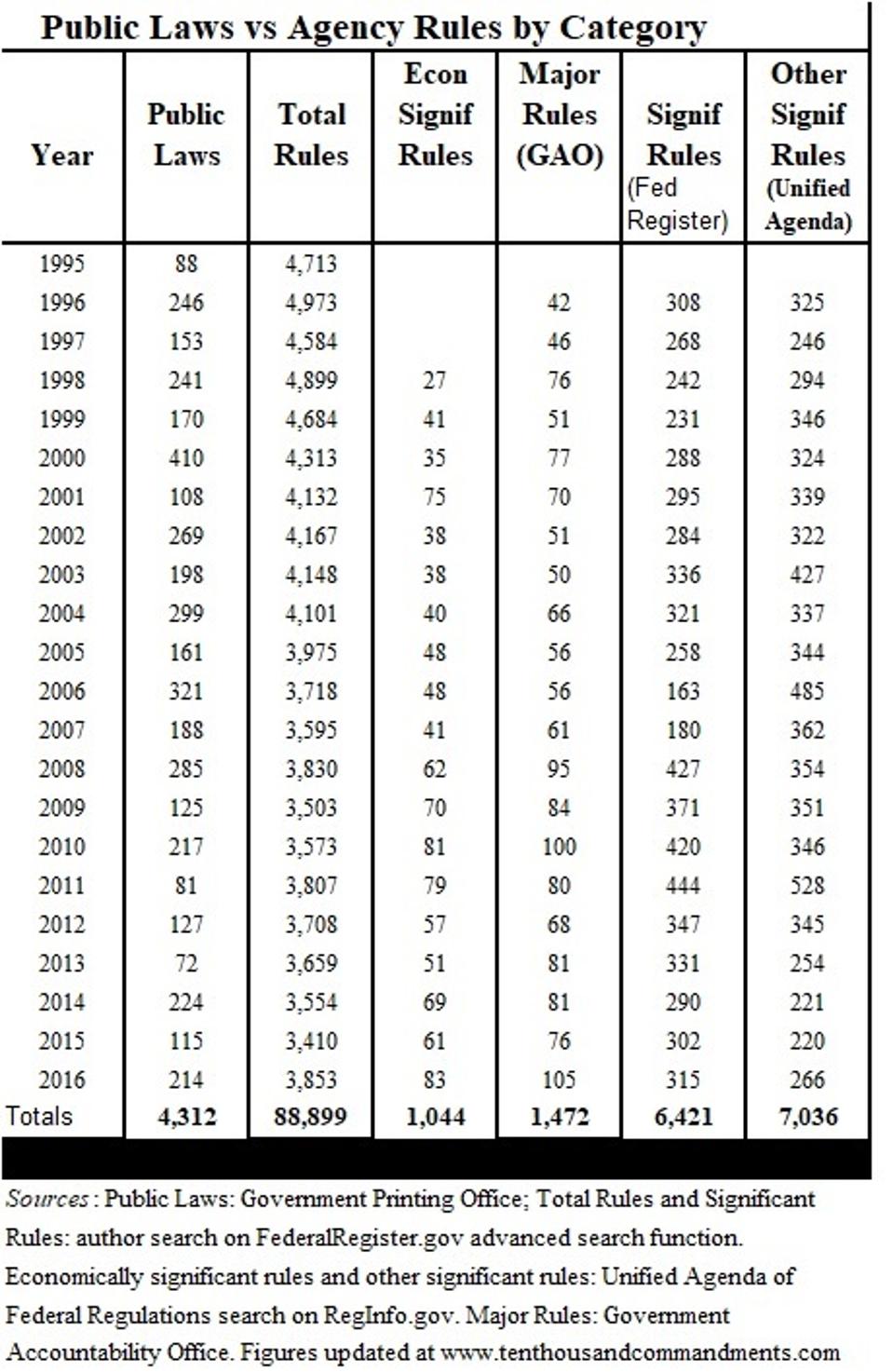 Another 2,419 proposed rules were in play at year-end 2016. Given the Trump administration moratorium, many of those were under review during 2017.

As the chart also shows, dozens or hundreds of rules each year are characterized as “major,” “economically significant,” or “significant.” There are differences between these defined in law and executive orders, but the frequent characterization is of at least $100 million in annual economic impact.

In the Trump era, things have slowed down considerably. While Trump's agencies have issued 1,748 rules since January 21 as of today, many were date-deferrals and such. Per Trump's 2-for-1 executive order, "economically significant" regulatory actions and guidances need to be offset.

If there's a desire in Washington to maintain a lower pace or even just to bring things into more balance, some of the measures in Congress, such as the bipartisan Regulatory Accountability Act (S. 951) to improve regulatory review would need to pass. It was introduced this year by Sen. Rob Portman (R-OH) and Heidi Heitkamp (D-ND).

For a more limited move, Trump's one-in, two-out proposal would be a good one to enact in law. As it happens, Rep. Mark Meadows (R-NC) has introduced H.R. 2623 legislation that put the in/out approach into law. It's called the "Lessening Regulatory Costs and Establishing a Federal Regulatory Budget Act" of 2017.

This cannot be deemed radical, since Sen. Mark Warner (D-VA) proposed one-in, one-out, and other nations have enacted such policies. Warner called his approach Regulatory PAY-GO. The point is, this "Trump" idea has bi-partisan legs, even in today's heated Washington environment.

And Washington does have to deal with the federal budget, the approaching debt limit and federal spending priorities. The increasing interconnections between the fiscal and regulatory enterprises should offer, one would hope, at least some opportunities for collaboration on the idea of making regulation more accountable to someone -- even in a year like this one. Washington doesn't just spend our money, it makes the private sector spend on its regulatory priorities too.

Or, is an accumulation of over 3,000 rules, plus untallied and undocumented regulatory dark matter besides, going to remain OK with policymakers even if the economy turns. We shall see.