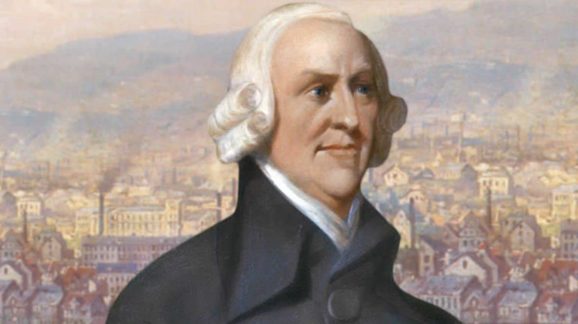 Today is a big day for anniversaries. Napoléon Bonaparte married his first wife, Joséphine de Beauharnais, on this day in 1796. Paraguayan forces were victorious at the Battle of Tacuarí in 1811. And one of the most influential books of the last few centuries hit bookshop shelves in 1776, Adam Smith’s treatise on economics An Inquiry into the Nature and Causes of the Wealth of Nations, better known these days simply as The Wealth of Nations.

Smith’s ideas about why some nations are wealthy and others are poor provide the basis for much of what we currently know about markets and wealth. And, of course, it’s just as popular today for us to make the same kind of inquiry as Smith did in the 18th Century. In the short video above, for example, economist Alex Tabarrok compares living standards in Central African Republic, Mexico, and the United States, finding that the average resident of Mexico has twenty-nine times as much buying power as his far-off friends in Central African Republic, while the average American has three times as many resources at her disposal as her cousins across the border in Mexico.

There are a lot of causes that influence that dramatic wealth disparity, but we know that some of the most important have to do with property rights, a stable currency, the freedom to run a business, and the ability to profit from one’s own inventions. Being able to make voluntary transactions with others while having redress in the case of fraud sets the stage for larger, more complex, and longer-term market interactions which eventually are capable of generating the staggering wealth of a nation like the United States. To the extent that ordinary people are forbidden, threatened, taxed, and regulated to such an extent that they can’t buy and sell to their own advantage, wealth creation is choked off and nations are poorer because of it.

In that sense, little has changed since Smith’s time. Laws and norms that increase economic freedom are likely to lead to greater wealth accumulation, and policies that close off voluntary transactions are likely to slow that growth or actually destroy existing wealth. Government restrictions on when banks can make loans to willing borrowers, for example, will likely reduce the numbers of loans and the productive new uses that those borrowers are looking to put that capital to. If we’re looking to continue being one of the wealthier nations of the world, we should fix that. Import taxes on essential manufacturing inputs—such as tariffs on steel and aluminum—increase prices in a way that rewards a few but punishes a far greater number. We should discard those policies, too, if we desire economic success.

Bonus anniversary: it was exactly 34 years ago that Competitive Enterprise Institute founder Fred L. Smith, Jr. officially put pen to paper and signed the documents creating CEI. You can observe this notable double anniversary by reading Fred’s birthday wishes to Adam Smith last year in Forbes. For a look back into how far we’ve come, peruse CEI’s delightfully retro 20th anniversary report from 2004.