“One of the methods used by statists to destroy capitalism consists in establishing controls that tie a given industry hand and foot, making it unable to solve its problems, then declaring that freedom has failed and stronger controls are necessary.” ~Ayn Rand 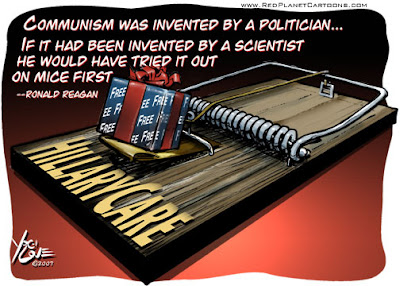 Most agree that the US health insurance market is in need of reform. However, there is a wide spectrum of beliefs about what the problems in the market are and the best way to confront them.

Those who believe that the reason premiums are high and insurance is less available than it ought to be due to rampant market freedom, believe that the solution is to create a government insurer that can pick up the slack of the private market. These folks would be wise to examine other insurance markets that have tried similar approaches to insurance “reform.”

Florida’s property insurance market, though they are not exactly comparable, provides a good example of what increased controls and the presence of a government funded entity can do to the insurance market.

Before the 2004/2005 hurricane season Floridians could find relatively affordable property insurance without much effort. Of course, there were a number of residents who could not find insurance or who could not afford the premiums (the cost of living in a region rife with environmental instability). After several large hurricanes, and paying out billions of dollars in claims to Floridian homeowners, insurers tried to raise rates to recover their losses. When they were denied the ability to raise rates as high as they wanted by the FL insurance department insurers began dropping or refused to renew hundreds of thousands of policy holders—leaving them without insurance at all. On top of that, in 2007 FL Governor Charlie Crist froze the rates that Citizens Insurance Co. could charge and set up a state Catastrophe fund (a taxpayer-funded nest-egg) that would bailout the state run insurance company if a bad season exhausted it’s funds—something that became increasingly likely as the rates it charged fell far short of the amount it needed to charge for the risk it was taking on. The fund was also no more than political smoke and mirrors since, like the state run insurance company, it drew money from taxes on the same limited pool—namely the residents of Florida.

After only 5 years in existence in its current form, Citizens Property Insurance, which was originally setup to serve only those residents who could not find or afford insurance in the private market, (much as Obamacare proposes to deal with the millions of uninsured Americans) it has become the largest single insurer in the state. By charging less than the private market and accepting people who could find private insurance, albeit at higher prices, private companies found it increasingly difficult to compete and some chose to leave the state all together. Fewer private companies forced more residents into the under-funded state-run insurance program and increasing the enormous potential liability that now threatens to bankrupt Florida.

Much like Floridian politicians, current proponents of state-run health insurance claim that it will not interfere with the private market; that it will only accept those millions of citizens who cannot find or afford insurance anywhere else. Not only is this assertion untrustworthy (every government program from the Department of Agriculture to the National Flood Insurance Program started small) but it also obscures the real causes of trouble in the  health insurance market. It isn’t because of too much market freedom, but too little. If we really want to solve the “crisis,” to whatever extent there is a crisis, we need to free the market and increase private competition (look to Massachusetts auto insurance market for an example of liberalization increasing availability and decreasing premiums), not undercut it by adding a taxpayer backed government insurer.